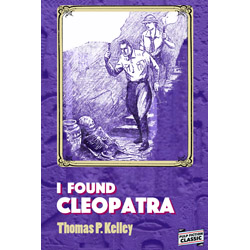 I Found Cleopatra – Brian O’Hara, young two-fisted American lawyer, has inherited the ancient Egyptian scroll which tells that the body of the great Queen Cleopatra lies in the heart of a mountain in the innermost part of the Sahara Desert — “not dead, but sleeping.”

A tale of romance and mystery, of the almost incredible fate that befell a young American who sought the tomb of Cleopatra, the famous Egyptian Queen.

Brian O’Hara, young two-fisted American lawyer, has inherited the ancient Egyptian scroll which tells that the body of the great Queen Cleopatra lies in the heart of a mountain in the innermost part of the Sahara Desert — “not dead, but sleeping.”

I Found Cleopatra
1. The Midnight Lady
2. Guns and Gangsters
3. What Happened on the Liner
4. The House of a Thousand Lights
5. Beyond the Last Outpost
6. Saharah Treachery

Thomas Patrick Kelley (1905-1982), was the self-proclaimed “King of the Canadian Pulps” and the “Fastest Author in the East.” He began writing pulp fiction in the 1930s, publishing mostly with Weird Tales and Uncanny Tales.

I Found Cleopatra has 5 illustrations.

I Found Cleopatra is also available on Barnes & Noble

FAR beyond the last outpost, deep in the heart of the great Sahara, surrounded by towering peaks, lies the weird and terrible valley that guards the Tree of Life. No man knows the hidden vale that burns as the sun hangs high. No man hears its sobbing winds, or sees the forms that howl to the stars in the eery hours of darkness. Just at the base of the southern slope is the cairn that hides the lonely grave. Close beside it stand the ruins of a long-forgotten temple, erected in those distant days when the world itself was young!

Even at the beginning I warn you that you will not believe this strangest of stories. The human mind is quick to doubt the bizarre, and this tale takes us far beyond the borders of sanity. Indeed, have I not time and again tried to delude myself that it all has been some horrible dream, and I the unfortunate victim?

IT IS then those memories come to prove its grim reality. From revery’s mists are wafted flashing eyes and taunting laughter. In dreams I flee through miles of sand, and ride once more with humans who fought and lived in the dawning. And in those long and slumber-tossed moments I watch the charges of a barbaric horde, and see again the tortures of a slender, dark-eyed maid.

It is then I awake to realize Sahara’s secrets now are mine, and that I alone of all men know the tree whose forbidden fruit was plucked by Eve and Adam!

But, to begin at the beginning: Strangely enough, it was the last bequest of my father that brought around the entire adventure. The great depression had made no exception of the house of O’Hara, and the spring of 1934 saw the once comfortable fortune of my sire reduced to almost nothing. That, together with the death of my mother two years earlier, I will ever believe to have been primary in the demise that left me, Brian O’Hara, alone to carry on with the law practise that had been our joint profession. In all probability I would have shortly resumed practise but for that strange and ancient parchment, so long a family possession.

The manner in which this had come to us was never quite made clear, though legend had it that back in Napoleonic days my great-great-grandfather, a dashing adventurer and soldier of fortune, had landed at a little settlement near Dakar, on the West African coast.

From here the tale grows hazy; one version being that the young Irishman stole the scroll from some temple, and had only managed to gain the ship with a howling horde at his heels. Another, and probably the most likely story, told of how it had been bought from some half-naked chief who claimed to have found it in the ruins of an old monastery, far inland.

However, whether one or both can be doubted, the fact remains that the new owner had promptly tossed his possession into a strong-box, where it remained, half forgotten with the passing of the years. Only recently—some six months past—had an effort been made to translate it, and with the aid of an archeologist associate I was able to learn its contents; namely, that the narrator, Kharmes the Egyptian, had been an officer of high rank in his country’s army, two thousand years ago.

Ever in those musty pages one read of the growing power of Rome, as well as the crumbling strength of the Ptolemys; of countless clashes of the light-armed tribes with clanking legions of the Caesars. It mentioned also a brief history of the narrator, as well as the many loves and adventures of the dark-eyed Queen he served—of the defeat of Cleopatra at Actium, and triumphant entry of Octavius into conquered Alexandria.

It was here that the parchment turned to the bizarre, to tell how Kharmes and four others had stolen to the tower of Isis Lochias in the dead of night, and received the heavy sarcophagus lowered to them from above; of the stealth with which they had slipped past the guarding sentinels, to reach at length the galley that waited on the moonlit Nile; then, at the command of the aged Baltarus, wise man and secret adviser of the Queen, of how the narrator had set sail in the great warship of a hundred slaves and fifty soldiers, to find a spot far beyond the Roman legions and known civilized world, that they might bury in a befitting manner “One who is but sleeping.”

It told of how the galley had landed after months at sea— months of storm and winds that swept upon them as they followed the coast of a seemingly endless world of beasts and jungle; of how the ship’s company had then deserted the galley, to travel inland for many days, penetrating ever farther into a strange country of sand, to come at last to a spot they all agreed as one no man had ever seen, concluding with the words:

“And so it was we came at last to the three mountains that towered to the sky. But it was not till Ra had sunk and risen many times that the tomb was dug deep, the sarcophagus we carried so long laid within, and the great boulder that guards its entrance brought into place. And then, “when this was done, and the orders of the Master carried out, the soldiers killed the slaves we had brought with us so that no loose tongue should tell the Romans our great secret.” 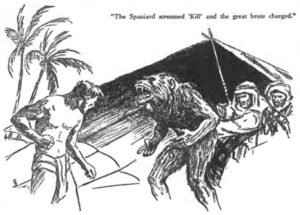