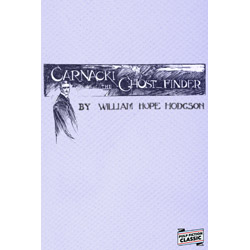 Thomas Carnacki, occult detective, finder of ghosts, demons, and even a few humans pretending to be ghosts.

Thomas Carnacki, occult detective, finder of ghosts, demons, and even a few humans pretending to be ghosts.

On occasion, Thomas Carnacki would invite a few of his friends around for dinner and to listen to a story of one of his cases of occult detection.

William Hope Hodgson (1877-1918) was the second of twelve children, three of whom died in infancy. Hodgson began his career as a writer in 1904 after nine years as a seaman in the British Merchant Marine, and several years as the owner of a gymnasium.

Hodgson died in 1918 when sent on a mission as an artillery spotter for the 84th Battery of the Royal Artillery.

Excerpt: The Gateway of the Monster

IN RESPONSE to Carnacki’s usual card of invitation to have dinner and listen to a story, I arrived promptly at 427, Cheyne Walk, to find the three others who were always invited to these happy little times, there before me. Five minutes later, Carnacki, Arkright, Jessop, Taylor, and I were all engaged in the “pleasant occupation” of dining.

“You’ve not been long away, this time,” I remarked, as I finished my soup; forgetting momentarily Carnacki’s dislike of being asked even to skirt the borders of his story until such time as he was ready. Then he would not stint words.

“That’s all,” he replied, with brevity; and I changed the subject, remarking that I had been buying a new gun, to which piece of news he gave an intelligent nod, and a smile which I think showed a genuinely good-humoured appreciation of my intentional changing of the conversation.

Later, when dinner was finished, Carnacki snugged himself comfortably down in his big chair, along with his pipe, and began his story, with very little circumlocution:—

“As Dodgson was remarking just now, I’ve only been away a short time, and for a very good reason too— I’ve only been away a short distance. The exact locality I am afraid I must not tell you; but it is less than twenty miles from here; though, except for changing a name, that won’t spoil the story. And it is a story too! One of the most extraordinary things ever I have run against.

“I received a letter a fortnight ago from a man I must call Anderson, asking for an appointment. I arranged a time, and when he came, I found that he wished me to investigate and see whether I could not clear up a long-standing and well— too well— authenticated case of what he termed ‘haunting.’ He gave me very full particulars, and, finally, as the case seemed to present something unique, I decided to take it up.

“Two days later, I drove to the house late in the afternoon. I found it a very old place, standing quite alone in its own grounds. Anderson had left a letter with the butler, I found, pleading excuses for his absence, and leaving the whole house at my disposal for my investigations. The butler evidently knew the object of my visit, and I questioned him pretty thoroughly during dinner, which I had in rather lonely state. He is an old and privileged servant, and had the history of the Grey Room exact in detail. From him I learned more particulars regarding two things that Anderson had mentioned in but a casual manner. The first was that the door of the Grey Room would be heard in the dead of night to open, and slam heavily, and this even though the butler knew it was locked, and the key on the bunch in his pantry. The second was that the bedclothes would always be found torn off the bed, and hurled in a heap into a corner.

“But it was the door slamming that chiefly bothered the old butler. Many and many a time, he told me, had he lain awake and just got shivering with fright, listening; for sometimes the door would be slammed time after time— thud! thud! thud!— so that sleep was impossible.

“From Anderson, I knew already that the room had a history extending back over a hundred and fifty years. Three people had been strangled in it— an ancestor of his and his wife and child. This is authentic, as I had taken very great pains to discover; so that you can imagine it was with a feeling I had a striking case to investigate that I went upstairs after dinner to have a look at the Grey Room.

“Peter, the old butler, was in rather a state about my going, and assured me with much solemnity that in all the twenty years of his service, no one had ever entered that room after nightfall. He begged me, in quite a fatherly way, to wait till the morning, when there would be no danger, and then he could accompany me himself.”

“Of course, I smiled a little at him, and told him not to bother. I explained that I should do no more than look ’round a bit, and, perhaps, affix a few seals. He need not fear; I was used to that sort of thing. But he shook his head when I said that.

” ‘ There isn’t many ghosts like ours, sir,’ he assured me, with mournful pride. And, by Jove! he was right, as you will see.

“I took a couple of candles, and Peter followed with his bunch of keys. He unlocked the door; but would not come inside with me. He was evidently in a fright, and he renewed his request that I would put off my examination until daylight. Of course, I laughed at him again, and told him he could stand sentry at the door, and catch anything that came out.

” ‘It never comes outside, sir,’ he said, in his funny, old, solemn manner. Somehow, he managed to make me feel as if I were going to have the ‘creeps’ right away. Anyway, it was one to him, you know.

“I left him there, and examined the room. It is a big apartment, and well furnished in the grand style, with a huge four-poster, which stands with its head to the end wall. There were two candles on the mantelpiece, and two on each of the three tables that were in the room. I lit the lot, and after that, the room felt a little less inhumanly dreary; though, mind you, it was quite fresh, and well kept in every way.”

“After I had taken a good look ’round, I sealed lengths of baby ribbon across the windows, along the walls, over the pictures, and over the fireplace and the wall closets. All the time, as I worked, the butler stood just without the door, and I could not persuade him to enter; though I jested him a little, as I stretched the ribbons, and went here and there about my work. Every now and again, he would say:— ‘You’ll excuse me, I’m sure, sir; but I do wish you would come out, sir. I’m fair in a quake for you.’

“I told him he need not wait; but he was loyal enough in his way to what he considered his duty. He said he could not go away and leave me all alone there. He apologized; but made it very clear that I did not realize the danger of the room; and I could see, generally, that he was in a pretty frightened state. All the same, I had to make the room so that I should know if anything material entered it; so I asked him not to bother me, unless he really heard or saw something. He was beginning to get on my nerves, and the ‘feel’ of the room was bad enough, without making it any nastier.

“For a time further, I worked, stretching ribbons across the floor, and sealing them, so that the merest touch would have broken them, were anyone to venture into the room in the dark with the intention of playing the fool. All this had taken me far longer than I had anticipated; and, suddenly, I heard a clock strike eleven. I had taken off my coat soon after commencing work; now, however, as I had practically made an end of all that I intended to do, I walked across to the settee, and picked it up. I was in the act of getting into it, when the old butler’s voice (he had not said a word for the last hour) came sharp and frightened:— ‘Come out, sir, quick! There’s something going to happen!’ Jove! but I jumped, and then, in the same moment, one of the candles on the table to the left went out. Now whether it was the wind, or what, I do not know; but, just for a moment, I was enough startled to make a run for the door; though I am glad to say that I pulled up, before I reached it. I simply could not bunk out, with the butler standing there, after having, as it were, read him a sort of lesson on ‘bein’ brave, y’know.’ So I just turned right ’round, picked up the two candles off the mantelpiece, and walked across to the table near the bed. Well, I saw nothing. I blew out the candle that was still alight; then I went to those on the two tables, and blew them out. Then, outside of the door, the old man called again:— ‘Oh! sir, do be told! Do be told!”