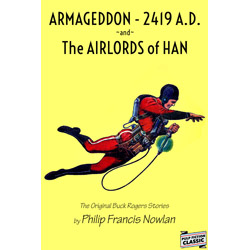 Armageddon 2419 A.D. and The Airlords of Han by Philip Francis Nowlan

Armageddon 2419 A.D. and The Airlords of Han – Caught in a mining accident in 1927, Anthony “Tony” (Buck) Rogers fell into a state of suspended animation and only came back to consciousness 492 years later. He awakens in a world where Americans are mere back woods gangs “not worth the trouble of subduing” by the ruling Han Airlords. And so the stage is set for the “Second War of Independence.”

Caught in a mining accident in 1927, Anthony “Tony” (Buck) Rogers fell into a state of suspended animation and only came back to consciousness 492 years later. He awakens in a world where Americans are mere back woods gangs “not worth the trouble of subduing” by the ruling Han Airlords. And so the stage is set for the “Second War of Independence.”

Author Philip Nowlan (1888-1940) and the syndicate John F. Dille Company, later known as the National Newspaper Service syndicate, were contracted to adapt the story into a comic strip. Nowlan adapted the first episode from Armageddon 2419, A.D. and changed the hero’s name from “Anthony” to “Buck”. The strip made its first newspaper appearance on January 7, 1929. Later adaptations included radio in 1932, a film serial, a television series and other formats.

Armageddon 2419 A.D. and The Airlords of Han is also available at Barnes & Noble and Amazon

… I, Anthony Rogers, am, so far as I know, the only man alive whose normal span of eighty-one years of life has been spread over a period of 573 years. To be precise, I lived the first twenty-nine years of my life between 1898 and 1927; the other fifty-two since 2419. The gap between these two, a period of nearly five hundred years, I spent in a state of suspended animation, free from the ravages of katabolic processes, and without any apparent effect on my physical or mental faculties.

When I began my long sleep, man had just begun his real conquest of the air in a sudden series of trans-oceanic flights in airplanes driven by internal combustion motors. He had barely begun to speculate on the possibilities of harnessing sub-atomic forces, and had made no further practical penetration into the field of ethereal pulsations than the primitive radio and television of that day. The United States of America was the most powerful nation in the world, its political, financial, industrial and scientific influence being supreme; and in the arts also it was rapidly climbing into leadership.

I awoke to find the America I knew a total wreck— to find Americans a hunted race in their own land, hiding in the dense forests that covered the shattered and leveled ruins of their once magnificent cities, desperately preserving, and struggling to develop in their secret retreats, the remnants of their culture and science—and the undying flame of their sturdy independence.

World domination was in the hands of Mongolians and the center of world power lay in inland China, with Americans one of the few races of mankind unsubdued—and it must be admitted in fairness to the truth, not worth the trouble of subduing in the eyes of the Han Airlords who ruled North America as titular tributaries of the Most Magnificent.

For they needed not the forests in which the Americans lived, nor the resources of the vast territories these forests covered. With the perfection to which they had reduced the synthetic production of necessities and luxuries, their remarkable development of scientific processes and mechanical accomplishment of work, they had no economic need for the forests, and no economic desire for the enslaved labor of an unruly race.

They had all they needed for their magnificently luxurious and degraded scheme of civilization within the walls of the fifteen cities of sparkling-glass they had flung skyward on the sites of ancient American centers, into the bowels of the earth underneath them, and with relatively small surrounding areas of agriculture.

Complete domination of the air rendered communication between these centers a matter of ease and safety. Occasional destructive raids on the waste lands were considered all that was necessary to keep the “wild” Americans on the run within the shelter of their forests, and prevent their becoming a menace to the Han civilization.

But nearly three hundred years of easily maintained security, the last century of which had been nearly sterile in scientific, social and economic progress, had softened and devitalized the Hans.

It had likewise developed, beneath the protecting foliage of the forest, the growth of a vigorous new American civilization, remarkable in the mobility and flexibility of its organization, in its conquest of almost insuperable obstacles, in the development and guarding of its industrial and scientific resources, all in anticipation of that “Day of Hope” to which it had been looking forward for generations, when it would be strong enough to burst from the green chrysalis of the forests, soar into the upper air lanes and destroy the yellow incubus.

At the time I awoke, the “Day of Hope” was almost at hand. I shall not attempt to set forth a detailed history of the Second War of Independence, for that has been recorded already by better historians than I am. Instead I shall confine myself largely to the part I was fortunate enough to play in this struggle and in the events leading up to it.

Excerpt From: Philip Francis Nowlan. “Armageddon – 2419 A.D. and The Airlords of Han.”

Read about The Evolution of Buck Rogers.

Armageddon 2419 A.D. and The Airlords of Han by Philip Francis Nowlan